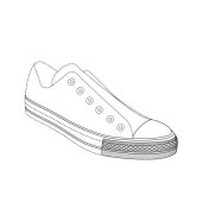 Did you know that the International Trade Commission (“ITC”) has the power to keep products produced abroad that may infringe your company’s trade dress (such as in the shoe shown above) from making a fast break into the United States? The enforcement powers given by Congress to the ITC in Section 337 of the Tariff Act of 1930 provide powerful remedies to holders of intellectual property rights in America, including rights to enforce patents, registered trademarks and copyrights, and [misappropriated] trade secrets, and those remedies can result in exclusion orders to be enforced by US Customs at the border, keeping those infringing products out of domestic commerce.

But sometimes getting Customs on board is not a layup. When Converse, the long-time maker of the iconic Chuck Taylor All-Star® basketball sneakers, attempted to box out the importation of a number of different styles of shoes that were alleged to infringe its US Trademark Registration No. 4,398,753 (“the ‘753 trademark”) in the trade dress in its mid-sole design shown above, the ITC refused to exclude the alleged infringing sneakers, finding the ‘753 trademark invalid because it had not acquired what is called “secondary meaning.”

What is secondary meaning?

The ‘753 trademark was issued by the United States Patent and Trademark Office in 2013 on trade dress based on three designs familiar to generations of basketball players who wore (or still wear) Chucks: two stripes on the midsole, the toe cap, and the diamonds on the toe bumper (see above).

In vacating and remanding the ITC decision, on October 30, 2018 the Federal Circuit, in Converse v. International Trade Commission and Sketchers, et al, after first explaining why a finding of secondary meaning is necessary in any trade dress case*, laid out the definitive analysis as to whether trade dress has acquired secondary meaning:

“Today we clarify that the considerations to be assessed in  determining whether a mark has acquired secondary meaning can be described by the following six factors: (1) association of the trade dress with a particular source by actual purchasers (typically measured by customer surveys); (2) length, degree, and exclusivity of use; (3) amount and manner of advertising; (4) amount of sales and number of customers; (5) intentional copying; and (6) unsolicited media coverage of the product embodying the mark….All six factors are to be weighed together in determining the existence of secondary meaning.”

On the issue of exclusive use in the second factor above, the ITC picked a number of third party sneakers identified by the respondents in the ITC action as “substantially similar” to the Converse trade dress to find that the Chucks weren’t the only basketball shoes using that trade dress. The Federal Circuit, finding that some of those shoes “bear at most a passing resemblance to the ‘753 trademark, identified, for example, the Keds shown below as “[e]xamples of prior uses that may not be substantially similar” to Converse’s trade dress: 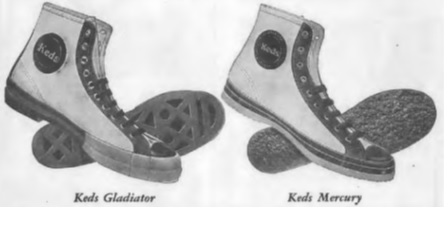 One might be tempted to say that the “passing resemblance” of these old school Keds to Chuck Taylors was cross court in nature, easily intercepted by the Federal Circuit (back)court.

As a result, Converse will have another shot at the rim, since the Federal Circuit vacated the findings of the ITC and remanded for further proceedings consistent with its analysis. Will the Chucks score on the rebound, and keep the alleged infringing shoes from dribbling into the US through a back door? Or will the ITC snuff Converse’s attempt to hit the game winner in overtime?

If you think your products have secondary meaning but are subject to unfair competition, whether from imported products or domestically produced ones, you may need a game plan. If you have any questions about any issues in patent, copyright, trademark, or trade secret law, please contact Gregory J. Winsky, Esq. in Archer’s Haddonfield office at 856-795-2121 or any member of our Intellectual Property Group.